An island in Prehistory. Neolithic and Bronze Ages finds from Kalymnos Dodecanese

The earliest prehistoric excavations on the island took place in 1887, when W.R. Paton discovered Mycenaean chamber tombs in the side of the torrent bed, which runs into the harbour of Pothia to the east of the hill of Perakastro, where the Late Bronze Age settlement stood. Most of the vessels found from Paton were presented to the British Museum while others are preserved in other European Museums. The first systematic excavations, however, took place only in the early twenties of the past century when the Italian archaeologist A. Maiuri director of the archaeological exploration of the then Italian islands of the Dodecanese, excavated the three prehistoric caves of Ayia Varvara (1920), Choiromandres (1921), and Vathy-Dhaskalio (1922), which are the object of the present study. 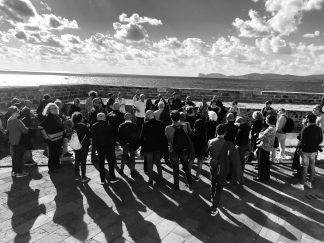